For other uses, see Episode 8.

Episode 8 is the eighth episode of Nowhere Boys Season 2, and the twenty first episode overall.

The talisman is missing - Jake and Felix are at loggerheads as to where it is. Could Saskia be to blame? Meanwhile, Andy meets a cloaked figure while trying to find a way out of negative space.

At the beginning of the episode, Sam, Felix, Jake and Ellen run towards the portal which Andy is attempting to get through. Once they get there, Jake sticks out his hand for Andy to help him. However Andy gets sucked back into negative space  and the portal seems to disappear.  After this happens, they discover that the talisman is missing and also Saskia is missing. They think she's the one who stole it, but Jake defends her and says she wouldn't do something like this.

Later on in the episode, Jake finds Saskia and runs towards her and confronts her, asking if she really did steal the talisman. She days she didn't and he believes her and she then says if he defended her from the accusation she was accused off. He said he didn't believe she would do such a thing. They then hug each other and Saskia leaves some Earth (dust) on Jake's jacket.

The boys soon return back to school in hope of finding what happened. They then find out that Saskia is missing and that she was withdrawn from school. This worries Jake and decides to use the school computer to find some details on her. He soon finds her address and that she is called Saskia Bloom. He then runs out of school and tells Sam. The pair then go to the address in hope of finding Saskia, but are shocked when they find their School teacher Mr Bates. He asks what they are doing and they say they got the wrong house and run back to the location of the gang.

They think of what to do and reliease that they can't find the real location of her as they don't have anything that belongs to her. Then Jake finds the earth on his jacket and says they could try and give that a go ( as the earth is Saskia's element). Felix agreed and gives it to Oscar to try and draw something in relation to the location of Saskia. He soon draws the later in the forest and know exactly where to go.

Once the gang get there, they see Saskia handing over the Talisman to Alice, this angers him and causes a mini earthquake which gives away their position. Alice orders Saskia to run away but Jake runs after her in a attempt to stop her. Once he does stop her, he finds out that she is being made to do this by Alice and that she has feelings for him, even though it shouldn't be possible.

They hold hands and Saskia hands him the Talisman and whispers to him "safe Andy" and the pair begin to cry and Jake is angry when Alice appears and turns Saskia to clay. He says she wouldn't get away with this and tries to safe Saskia though Sam pulls him away and once they are in the clear, Jake gets angry at them all and Felix says she was a Golem and not real. This makes Jake worse and says she was real for him and throws the Talisman at Felix and says "here's your stupid talisman, you better find Andy with it!". And walks off and is clearly upset with Saskia going as he liked her and she liked him.

Sam trying to help Andy out. 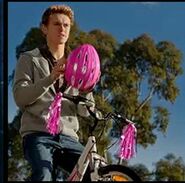 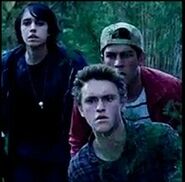 The boys looking over at Saskia and Alice. 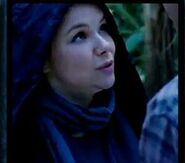 Saskia talking to Jake.
Add a photo to this gallery
Retrieved from "https://nowhere-boys.fandom.com/wiki/Episode_8_(Season_2)?oldid=23747"
Community content is available under CC-BY-SA unless otherwise noted.