For other uses, see Episode 7.

Episode 7 is the seventh episode of Nowhere Boys Season 2, and the twentieth episode overall.

Overwhelmed, Ellen tries to process their journey to the other universe and refuses to talk to Felix, while Jake is shocked to discover that Cop Gary has followed them through the portal.

Once the boys get back to the Real World, Felix informs the boys that he saw something in between the two worlds, but doesn't know what is it yet. After this, we see cop Gary coming through the portal into their world, not realising what just happened he think he's in the same universe. Gary goes to the police station, and he thinks it's his as he doesn't know he swapped universes. He finds out everything looks out of place and when the proper policeman arrives, he tells him to get out or he will arrest him.

Jake then goes back to his house and finds Saskia waiting for him and asked if he has found his friend yet. When he says no, she says that you will eventually and gives him a hug. He then hears the phone ring and invites Saskia inside while he talks and on the phone is Gary. They both rush down to the police station and find cop Gary getting threatened by the police. Jake tries to help by saying he was wearing fancy dress and was all a joke. Cop Gary gets off with a warning and the three of them walk off and Jake informs Gary about what just happened and decides it's best for him to hide in the hideout the boys used in the Alternate World.

At the same time, Ellen and Felix go to her house in order to try and find something that connects her and Andy together. She says to find the necklace that Andy gave her. However they both find identical ones and are surprised when they both cancel each other out and disappear.  At the same time as this, Felix gets a call from Jake informing him that Cop Gary has came into this world and has gone exploring. Witnessing what just happened, Felix knows that the two Gary's can't meet or they will both disappear and says to Jake we will be right there.

The gang all meet up and Jake explains his reasons for why he didn't tell them about cop Gary being here. They go on a search for Gary and eventually find him at a party in the park area, and he is talking to Sarah.

The original Gary is there as well, but is also told to go home with the assistance of Sam and Ellen. As Jake, Saskia and Felix take the cop Gary back he gets possessed by the demon , but are surprised when he walks straight past them. The normal Gary is also possessed and him too walks past Sam and Ellen, and then they all realise they want to touch so they never exist ( therefore order will be restored). Once they reach each other, they draw a circle around Cop Gary and Sam and Jake use their powers to stop them touching while Felix casts a spell to send cop Gary back home. 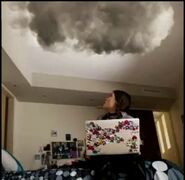 Ellen looking up at the cloud in her room. 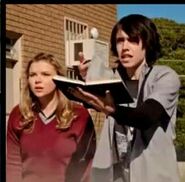 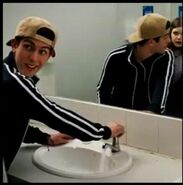 Andy trying to get back.
Add a photo to this gallery
Retrieved from "https://nowhere-boys.fandom.com/wiki/Episode_7_(Season_2)?oldid=23743"
Community content is available under CC-BY-SA unless otherwise noted.