For other uses, see Episode 4.

Episode 4 is the fourth episode of Nowhere Boys Season 2, and the seventeenth episode overall.

After being beaten to Alice's Book of Shadows, Felix theorises that if they find another water element, they should regain their ability to use magic. So the boys go on the hunt for the new element.

The episode begins with Jake and Sam reminiscing on how they lost the Book of Shadows to Alice, along with any hope of getting Andy back. However Felix comes up with the idea of finding a new element, which would allow them to perform a Tracking Spell to find Andy. Sam and Jake are surprised at the possibility of there being another water element, leading Felix to explain that they aren't the only individuals with magical potential. Their discussion is cut short when they see Roland parked outside Felix's house.

Later, the Nowhere Boys decide to search for a new water element at Bremin High School. Felix explains how he managed to track down the four current members of the Nowhere Boys, where he spotted individuals with signs of magic potential. For Jake, Felix had been spying on him and his friends during a daily bullying ritual towards Mike Parker. Mike had hid in a dumpster, but Jake was somehow able to find Mike, before stealing his lunch. For Sam, Felix once spotted him flirting with Mia, where Sam was somehow able to keep a student from walking into a door when his back was turned. For Andy, Felix noticed Andy was able to give the correct answer in class before Bates had even said the question. After determining their magical potential, Felix had figured out each other boys' elements based on their personalities, as shown by the notes in his diary.

Felix's notebook, displaying the entries for Sam and Jake.

Jake tracks down Mike to test his magical potential...

...but he gets more than he bargained for.

Mia demands the truth from Sam. 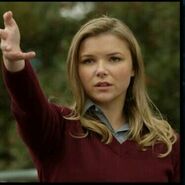 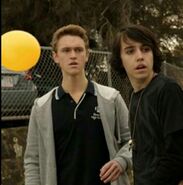 Jake and Felix look at Saskia in shock.
Add a photo to this gallery
Retrieved from "https://nowhere-boys.fandom.com/wiki/Episode_4_(Season_2)?oldid=23740"
Community content is available under CC-BY-SA unless otherwise noted.