For other uses, see Episode 2.

Episode 2 is the second episode of Nowhere Boys Season 2, and the fifteenth episode overall.

Felix, Jake and Sam race against time to get Andy back from the storm that took him - before anyone notices he's missing again.

The episode resumes with Andy's disappearance, and the boys try to figure out watch just happened. Felix comments that he had never seen the spell Andy had just cast, and wasn't sure if it was even in his diary.

The Water Demon splits itself into three in order to pursue the boys. 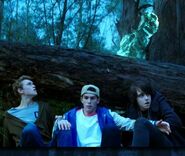 The boys hiding from the demon.
Add a photo to this gallery
Retrieved from "https://nowhere-boys.fandom.com/wiki/Episode_2_(Season_2)?oldid=23738"
Community content is available under CC-BY-SA unless otherwise noted.