Nowhere Boys: The Book of Shadows

For other uses, see Episode 13.

Episode 13 is the thirteenth episode of Nowhere Boys Season 2, and the twenty-sixth episode overall.

With the gang now powerless, Felix has devised his own plan to rescue Andy. He's going to ask Alice to swap him for Andy. Will the rest of the gang realise in time?

At the beginning of the episode, we see that Felix says to the gang that's its all over and should go home. They rather reluctantly walk off while Felix stays behind to go and talk to Alice about him swapping places with Andy as he wants to bring him back as he thinks it's all his fault this has happened. Soon Ellen realises that Felix has gone to fight Alice alone and quickly informs the rest of the team. Once they eventually get to them they are interrupted by the new powers Phoebe has acquired and the whole building collapses on them. A couple of minutes later the restoring demon appears in the form of the twister which is Andy. This has happened as order is out of place (Phoebe has powers she shouldn't have). Felix informs the people they need to work together in order to get rid of demon, and eventually they do and it goes away back to negative space.

Later on in the episode, they all reach to an agreement that the only way to get Andy back is for Alice to go back to negative space. She didn't like the idea at first but soon agrees to it. Once the portal is open, Alice goes through and so does Phoebe as she wants to go and help. Once they get there they try and tell Andy to go through as he doesn't have much time. Before he goes through he gives Bear a bracelet to indicate they are both "brothers."

Once he finally goes through, he reunites with his mates and they all have a man hug and soon the TV reporters turn up demanding an explanation as too what happened. Andy, not wanting to explain makes the camera spring a leak and they all laugh and run off feeling delighted to have Andy back.

At the end of the episode,they all have a get together to celebrate and Ellen and Andy have a talk and Andy says to her that he doesn't mind her not liking him and they make it up and become friends. Sam is doing his usual and eating away while Felix goes over to Oscar asking what he is doing. He states that he did a drawing of Felix and he was trapped in negative space. Felix assures him that it isn't going to happen....but Oscar isn't so sure.

Andy as the Restoring Demon.

Andy learns to use his emotions to control the Restoring Demon.

Restoring Demon Andy asks Phoebe to come with him.

Andy is reluctant to leave because of the promise he made.

Andy makes it through the portal in time.

Andy finally gets reunited with his friends.

All of the friends in a group hug.

The Nowhere Boys take a selfie. 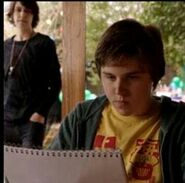 Oscar looking at his 'future' drawing.
Add a photo to this gallery
Retrieved from "https://nowhere-boys.fandom.com/wiki/Episode_13_(Season_2)?oldid=23753"
Community content is available under CC-BY-SA unless otherwise noted.