Ellen O'Donnell is a girl who attends school at Bremin High. She is the alternate version of Ellen from the Real World.

She is completely the opposite to Ellen of the Real World. Unlike her counterpart, this Ellen is cheery, friendly, girly, actively engages in her social life and is not a goth. She runs a video blog called "Wot the Elle."

She also develops feelings for Andy Lau after he saves her from being hit by the bus. However, she apparently still shares the fact that she can hold a grudge for a long time, just like the original.

Return of the Nowhere BoysEdit

When the boys returned to the Alternate World, Ellen came face-to-face with her counterpart from the Real World while playing netball, surprised to find that her counterpart is a goth and is in love with Felix instead of Andy. 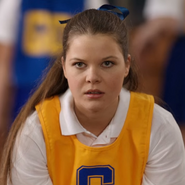 Ellen looking at the original Ellen.
Add a photo to this gallery

Retrieved from "https://nowhere-boys.fandom.com/wiki/Ellen_O%27Donnell_(Alternate_World)?oldid=24782"
Community content is available under CC-BY-SA unless otherwise noted.