"The Entity Face Off"

"Did you skip a grade?"
"No...?"
"Oh. I did. I mean, I'd skip another one but they said it would be bad for my social interactions."
―Ben Ripley and Luke Hamill[src]

Benjamin "Ben" Ripley, previously referred to as "Bad Ben" to distinguish him from his Empty World counterpart, is the Guardian of the multiverse,[2] and a former student of Bremin High School.

Ben is an intellectual student and a bit socially awkward. Compared to his counterpart from the Empty World, he has a higher pitched voice and is much more neat.

Later on he is revealed to be very cruel and manipulative. He repeatedly tricks the Nowhere Gang. He temporarily imprisons Ben 2 in the Empty World, and repeatedly tries to steal the Talisman. His end game is to release the Mega Demon and use it to devour everyone and destroy the world.

Ben was considered a social outcast and had difficulty making friends. One day Luke Hamill arrived at Bremin High School as a new student, and Ben was instructed by Principal Bates to be his guide. Ben also displayed a crush on Brooklyn Wansbrough, mistaking her friendliness for reciprocal attraction.[3]

Ben's element is spirit allowing him to obtain visions. Ben is shown to be able to control the Atridax with simple hand gestures. After the defeat of the Mega Demon, Ben continued to have prophetic dreams relating to the Entity. Ben discovered after casting a spell that he was the Guardian tasked with restoring the multiverse after the Entity rose to power and began destroying worlds. As the Guardian, Ben was able to control all five elements. He could create balls of water and fire, generate sinkhole-making tremors, and control air with gusts of wind. He achieved this with the Nowhere Gang's help by tapping into the their powers. His own spirit element was also increased allowing him to project himself to other places without moving his body. He was also able to teleport anywhere across Negative Space just by thinking about his destination.

Ben is exceptionally knowledgeable in magic, he was a lenticular successfully activate the atridax with a ritual and execute it without failure. Ben utilized a digital Book of Shadows he dubbed "the BOSS," as he was knowledgeable in spells enough to create his own book. 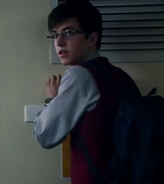 Ben with the Nowhere Gang after defeating the Entity in Negative Space.
Add a photo to this gallery

Retrieved from "https://nowhere-boys.fandom.com/wiki/Ben_Ripley_(Real_World)?oldid=24480"
Community content is available under CC-BY-SA unless otherwise noted.