"We're hinting to sexuality and if we get to Season Four we'll get to play that out a bit more as well, which I think is very exciting."
―Tony Ayers on Jesse and the possibility of a fourth season[src]

Battle For Negative Space, stylised as Nowhere Boys: Battle For Negative Space, is the fourth and final season of Nowhere Boys.[1] Pre-production of the season begun in 2017,[2] and like the previous seasons, it has thirteen episodes.[3] In the new series, the gang have returned from a summer of magical training more powerful than ever, and with a new member. The series also marks the reappearance from one of the original boys,[4] who was later revealed to be Jake Riles, portrayed by Matt Testro.

In the penultimate season the Nowhere Boys – Luke, Nicco, Heath and Jesse – are more powerful than ever after a summer of magical training. But with the New Year comes new threats and when a series of elemental attacks hit Bremin, the Gang fear their powers are the cause of the trouble. But all is not as it seems as the Gang discover that dark, chaotic forces have been unleashed on Bremin, intent on dividing them. The Gang’s unity is challenged and the future of the entire multiverse hangs in the balance.[1]

The Nowhere Boys have defeated the Mega-Demon, but now discover a more powerful force of chaos has been unleashed, and the Gang's unity is challenged as the future of the entire multiverse hangs in the balance.[6]

This year, the gang return from a summer of magical training more powerful than ever – and with a new member. But the New Year brings new threats, when a series of elemental attacks hit Bremin. The gang fear their powers are the cause of the trouble as dark, chaotic forces descend, challenging the gang's unity as they battle to save the entire multiverse.

The Nowhere Boys must balance their personal lives with their magical obligations. Growing up is hard enough without having to rescue the multiverse as well, as the gang search for their place in the world. What will they sacrifice for each other?

Returning cast Kamil Ellis (Luke), Joe Klocek (Heath), William McKenna (Ben), Jordie Race-Coldrey (Jesse), and Luca Sardelis (Nicco) are joined this season by musician Joel Ma (aka Joelistics) in his TV debut as Zeb and Elaine Crombie (Top Of The Lake, Black Comedy) as Brianna. This season also sees a special return from one of the original Nowhere Boys. But, you’ll just have to wait to see who might be back in Bremin...[4] 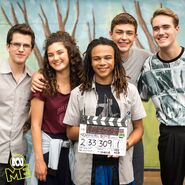 Behind the scenes announcement.

Promotional image for the season. 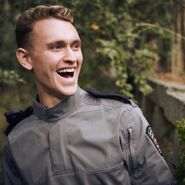 Jake Riles in the new season. 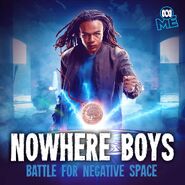 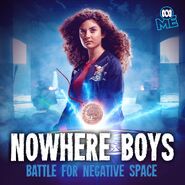 Nicco's promotional picture.
Add a photo to this gallery

Retrieved from "https://nowhere-boys.fandom.com/wiki/Battle_For_Negative_Space?oldid=25070"
Community content is available under CC-BY-SA unless otherwise noted.